Are you being ogled?

by Mark Sappenfield, Staff Writer for The Christian Science Monitor

I came across an article with a provocative headline the other day. It read, “Study: Ogling women makes them worse at math.” Basically, the study wanted to figure out what happened when men and women felt objectified, something the researchers defined as people being “judged on body parts or sexual function without regard to other aspects of their personality.” So several members of the study team were trained to stare at men and women in an inappropriate way, then the men and women were asked to take a math test.

The women who were objectified did worse than women in a control group who were not. (The men showed no difference.) Moreover, other research has shown that women do worse on math tests when they are told before starting: “Girls are bad at math.”

We often think of contagion as being a process of microbes and viruses. But how often do we think about mental contagion? Yes, we admit that we are influenced by our friends, our parents, our co-workers. Still, these studies are shocking – showing the degree to which we unconsciously allow others’ thoughts to shape our experience. This is mental tyranny, and thankfully it is something that we can summarily reject.

How? We can start by understanding our origin and nature. Mary Baker Eddy, the author of “Science and Health with Key to the Scriptures” (see p. 525), refers to the Icelandic Bible translation of this verse from the first chapter of Genesis: “And God said, Let us make man after our mind and our likeness; and God shaped man after His mind; after God’s mind shaped He him; and He shaped them male and female” (verse 27).

So all that we are is the likeness of God’s mind. We are not a body to be ogled or a brain of doubtful mathematical aptitude. We are an image of God’s thought, and the allness of God precludes the intrusion of anything unlike this perfect likeness in this image. This frees us from aggressive mental intrusion… Read more

Study: Ogling women makes them worse at math
Not measuring up?
Your specialness in God’s eyes

“Science and Health with Key to the Scriptures”

Over 10 million copies sold. This book is helping people all over the world find health, healing, and greater freedom through an understanding of their relationship with God. Order from Amazon, Online Shop, Kindle, or read free online. 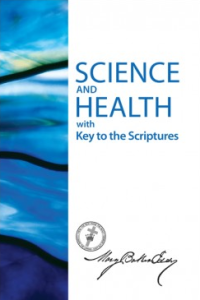